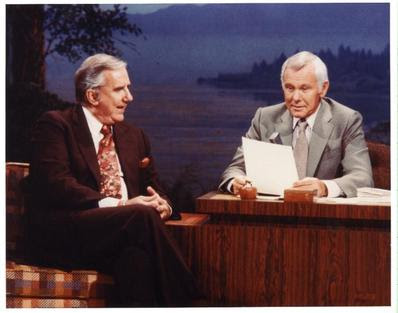 He rode shotgun with the king of late night TV, Johnny Carson, for years. His guffaws punctuating even the lamest of jokes that Carson made...he was the ultimate side kick; Ed McMahon.

For those of us of a certain age, Mr. McMahon was like a favorite uncle, the one who seemed to be into everything. Be it, life insurance, dog food, and yes, even the Publisher's Clearing House Sweepstakes.

For some reason, when I heard about his passing earlier today, I felt really sad. It's disheartning watching these early pioneers of Broadcast Televison slowly pass away. More than that, it's like losing a beloved relative.

So tonight, raise a glass to Uncle Ed, I am sure he would appreciate that.
Posted by Pax Romano at 3:26 PM

I'm sorry, Pax, but I never took a liking to him...maybe because he seemed so insincere to me! One should never speak badly about the dearly departed, so, I have to admit, it is all in my perception!

Darling it was sad to hear of his passing earlier today, I think Carson was the last late night talk show I really watched, I like some of the current hosts but not enough to stay up that late. I'n sure he's already been reunited with Johnny as well as with "Carnack" and "Aunt Blabby".

One by one by one these "icons" of our 70's upbringing are departing. Does this mean we're getting old?