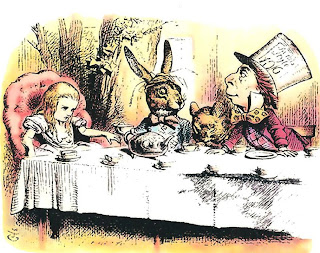 Thing's have gotten too damn serious lately ... allow me to tell you about a meeting we had at work the other day ... or as I like to call it:

The table was set in the magic castle of the mad social workers of Officeland.

They gathered around fine Styrofoam goblets filled with cheap coffee, and reached for sugary-day-old donuts that would fuel their manic rants and raves.

While waiting for the Red Queen to arrive, the mad social workers found themselves overcome with caffeine fueled energy, and much merriment ensued.

The White Rabbit spoke brazenly, Alice did a dance with the March Hare, Tweedledum and Tweedledee put their feet up and recited some bawdy poetry ... only The Dormouse felt the need for structure and tried to bring the others to order; but they would not hear of it!

The Mock Turtle in his mock turtleneck sweater managed a smile, while the Gryphon and the King of Hearts began playing cards ...

Eventually the White Knight tried to speak officially, but even he fell under the spell of whatever lunacy was afoot.

And then, when the Red Queen did arrive, and in her usual manner, tried to take matters into her own hands; the others were shocked as The Dormouse tried to take her to task for interrupting his train of thought!

And so it went for the next hour, the mad social worker's tea party, in the magic castle of Officeland ...
Posted by Pax Romano at 6:21 PM

The time has come, my little friends, to talk of other things, Of shoes and ships and sealing wax, of cabbages and kings. And why the sea is boiling hot, and whether pigs have wigs, Calloo, Callay, come run away. With the cabbages and kings.

Twinkle twinkle little bat, how I wonder where you are at...

O I can envision the merriment! HAHA

I can answer that Pax darling, possibly trapped in dear Whatshisname's wiglet.

I understood this way better than The Three Little Pigs. lol

Twas brillig and the slithy toves
Did gyre and gimbel in the wabe...

Pax, this will not do. I want a translation!