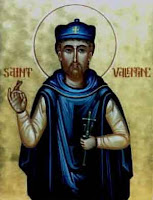 While we are busy with candy, hearts and flowers today, celebrating Valentine's day - I've always been interested in exactly why February 14th was designated as a day to commemorate love.

I went back to a posting I did on this very blog on February 13th, 2005, and found  the following:


I was talking to a friend on the phone yesterday. He works for UPS and told me that they (the UPS drivers) refer to Valentine’s Day as “Little Christmas”; that is because it is the second busiest time of the year for them for delivering parcels.

We talked about the roses and candy that are bestowed upon objects of desire and wondered to each other how this day came to be. He said to me the he understood that Saint Valentine was a Catholic martyr who may have had his tongue removed and was later beheaded.

“Imagine that”, I added, “This year show your Valentine how much you love them by cutting your tongue out!”

“Wait”, he added, “Show them you REALLY love them by having your head removed and sent to your lover amidst a bouquet of blood red roses!”

We laughed at this Stephen King moment and continued getting more disgusting with our ideas for real Valentine’s gifts.

Later on I went on-line and read a little bit about the history of Valentine’s Day (and here’s an aside, does anyone recall when it WAS known as Saint Valentine’s Day?). There is all kinds of interesting stuff out there about the day including various tales of Saint Valentine. He may have been a priest who, while in jail, defied a Roman Emperor and continued marrying young couples. Said young lovers, would send him their wishes written on flower petals and leaves (hence the ritual of “Sending Valentine’s”). Most of the stories about him do indicate that he was killed, but I could not find anything about him having his tongue removed.

Interestingly, the holiday seems to be for the birds; that is, there was a common held belief in Europe that birds chose their mates on the 14th of February, so why not people?

Fascinating, from beheaded holy men to mating birds, today we set aside a day that the card makers and candy pushers make a bundle on; all in the name of love.

Well, no matter how you are spending the day, here's wishing you a wonderful Saint Valentine's Day!
Posted by Pax Romano at 10:04 AM

Yes this must be the second biggest holiday for the candy makers, after halloween!