The Work for the Happy Finger Method Must Continue!

In a nutshell: Little Bart is an all American boy who wants nothing more than to play baseball, run with his dog, and have a good time. Unfortunately, his well meaning mother feels that he needs to learn to play the piano and brings in the harsh, if somewhat fey, Dr. Terwilliker (Hans Conried) to teach the little towhead how to tickle the ivories.

Bart's only ally is August the plumber, who is in Bart's house fixing the pipes or something like that. Even so, Bart's mother insists that her son practice, and that's when the fun starts. Soon, little Bart dozes off and finds himself in a crazy dream world that might remind you of something Tim Burton and Salvador Dali dreamt up ... then again, this is when it becomes apparent that The 5,000 Fingers of Dr. T. was written by the one, the only, Dr. Seuss. 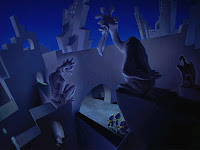 It's also while in this dream world that the film takes on almost Freudian overtones ... you have to see this movie to really understand - the worlds largest keyboard, the elevators, the ladders to nowhere, the conjoined at the beard Siamese twins ... I mean somebody was working out SOME kind of issues.

Another strange thing about the movie, is that Dr. Terwilliker is obviously gay (as in Liberace gay, as in flaming, as in Grande Dame gay!). Don't believe me? Check out this clip where the good doctor is getting dressed for the opening day of his piano school...

Wow, Clay Aiken should add this song to his repertoire.

Once again, I remind you that Dr. Seuss wrote all of the lyrics (as well as the story and screenplay).

Now, get to Netflix and get to watching! And remember, The work for the Happy Finger Method must continue!!!
Posted by Pax Romano at 8:15 PM