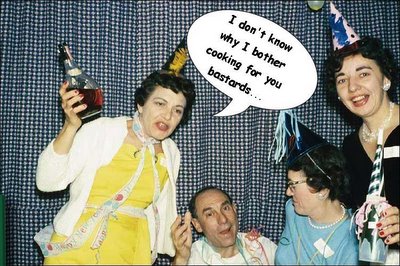 Have fun on Turkey Day with this Original Drinking Game:


To play you will need the following:

* A bottle of your favorite spirits.
* A shot glass.
* A seat at the table during dinner with your family or a reasonable facsimile.

Every time someone says, “If I eat anything else, I am going to burst” – TAKE A SHOT

Every time someone compliments the host/hostess on the bird, “Gee Aunt Flossie, this turkey is so moist!” – TAKE A SHOT

When the host/hostess proclaims, “I forgot the cranberries!!” – TAKE A SHOT

If someone says, “I hate sweet potatoes.” – TAKE A SHOT

Every time a relative says, “I can’t believe its Thanksgiving already.”- TAKE A SHOT

If someone follows this up by saying, “It’ll be Christmas before you know it!” – TAKE A SHOT.

If the host/hostess is playing holiday music in the background – TAKE TWO SHOTS, you’ll need them.

Inappropriate sexual remarks made by anyone to any of the other guests. – TAKE A SHOT

Depending on how many there are, TAKE A SHOT, per passed out guest on the sofa in the living room while football game is one – if pants are undone, TAKE A SHOT AND A HALF.

If some one curses out someone else – TAKE A SHOT: If they are related: TAKE TWO SHOTS.

When the first big dramatic proclamation occurs (“I’m gay” “I just quit my job” “My therapist says that I am so screwed up because of you, Uncle Jake!” “Yee haw, I just got my third DWI”) TAKE A SHOT (Note, IF YOU MAKE THE PROCLAMATION, YOU HAVE WON, THE GAME IS OVER).

Awesome game. I made a link to it on a post I did for my blog ( http://austinnightowl.wordpress.com ) compiling some of the best Thanksgiving Day drinking games.